Posted by Roger on Thursday, 18 March 2010 in Sports and injuries 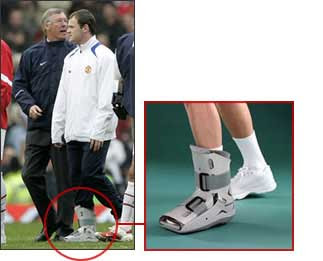 Athletes are at high risk for developing disorders of the Achilles tendon. Achilles tendonitis and tendonosis are also common in individuals whose work puts stress on their ankles and feet, such as laborers, as well as in “weekend warriors”—those who are less conditioned and participate in athletics only on weekends or infrequently.

There is speculation that it may take as long as a year for David Beckham to recover from his injury. In diagnosing Achilles tendonitis or tendonosis, the surgeon will examine the patient’s foot and ankle and evaluate the range of motion and condition of the tendon. The extent of the condition can be further assessed with x-rays or other imaging modalities.

Treatment approaches for Achilles tendonitis or tendonosis are selected on the basis of how long the injury has been present and the degree of damage to the tendon. In the early stage, when there is sudden (acute) inflammation, one or more of the following options may be recommended:

* Immobilization. Immobilization may involve the use of a cast or removable walking boot to reduce forces through the Achilles tendon and promote healing.
* Ice. To reduce swelling due to inflammation, apply a bag of ice over a thin towel to the affected area for 20 minutes of each waking hour. Do not put ice directly against the skin.
* Oral medications. Nonsteroidal anti-inflammatory drugs (NSAIDs), such as ibuprofen, may be helpful in reducing the pain and inflammation in the early stage of the condition.
* Orthotics. For those with over-pronation or gait abnormalities, custom orthotic devices may be prescribed.
* Night splints. Night splints help to maintain a stretch in the Achilles tendon during sleep.
* Physical therapy. Physical therapy may include strengthening exercises, soft-tissue massage/mobilization, gait and running re-education, stretching, and ultrasound therapy.

Prevention
To prevent Achilles tendonitis or tendonosis from recurring after surgical or non-surgical treatment, the foot and ankle surgeon may recommend strengthening and stretching of the calf muscles through daily exercises. Wearing proper shoes for the foot type and activity is also important in preventing recurrence of the condition.

Do not hesitate to call us if you are experiencing the same or similar symptoms as David Beckham.

Melissa Robitaille, D.P.M.
Medicine, Surgery and Injuries of the Foot, Ankle and Leg for Adults and Children
http://www.atlanticfeet.com
Tagged in: Sports and injuries